What is Volume Delta?

Delta volume is a great way to see the balance of buyers versus sellers. It’s a very simple metric and is calculated by taking all the “at offer” trades and subtracting all the “at bid” trades within a specific bar. It’s seen as the balance of the more aggressive participants who are trading “at market”. In IRT, you’ll need to have the pro license and the indicator to use is “Volume Breakdown”. The following are settings to accumulate the delta session values: – 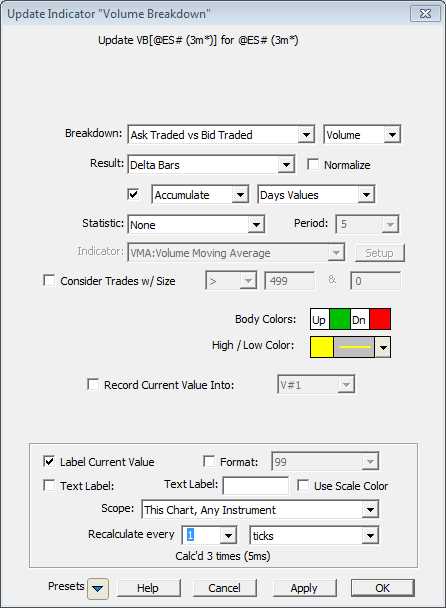 This is the result and what the delta looks like: – 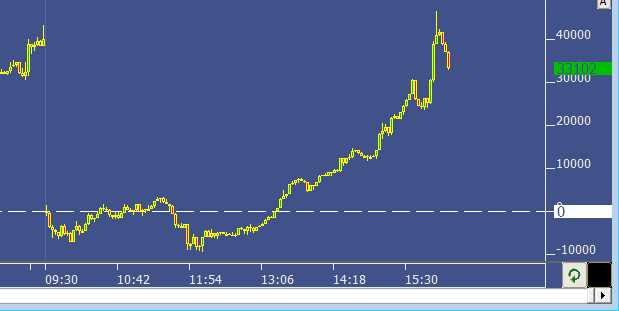 What I’m Looking For

Generally speaking, a big delta thrust with the right context, portends an extension in the direction of the thrust. So I’m looking to find what a big delta move is and then importantly, see if I can find out how much it then causes price to move in the following bars. I’ll look at several numbers of bars to get the delta range and look at if price extends the extreme set in the delta period and by how much. I’ll be using 3min bars for this as speed is a factor in aggression and generally speaking, large delta over less time seems to have a greater impact on subsequent price movement.

A consideration is that if I take multiple bars for a delta range and then compare multiple subsequent bars for the price extension, the first and last few bars of a session cannot be fairly compared. Therefore in this study I will just emit them entirely. Also, for accurate delta you need tick data (although there is an indicator which will estimate it for you in IRT called “Effective Volume”) so this is not a large study. As currently I’m not retaining vast amounts of tick data and IQFeed only provide access to 120 days’ worth, this can’t be seen as an exhaustive study. There is a program called “Q-Collector” which will automatically store data as you require and it may be something which I look at using at some point in the future.

The spreadsheet is again about lots of IF statements. I’ll not go into it now but if at some point the forum gets up and running, I may start posting study spreadsheets there. Here’s what it looked like anyway: – 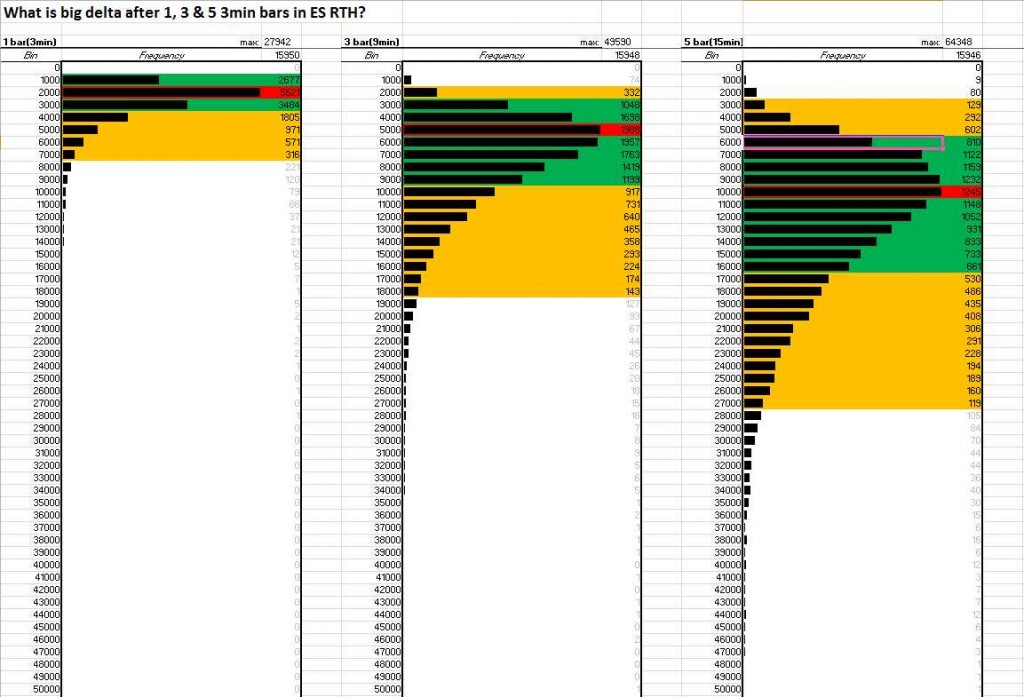 A big delta (>2σ) for 3 x 3min bars is more than 10,000 or for 5 x 3min bars is more than 17,000. Over 3 bars, 10k or more delta gives a 61% chance of the extreme (based on direction of delta from open to close) being taken out within the following hour and the extension averages 3.1 points. Over 3 bars, any delta gives an 80% chance of the extreme being broken within the hour with an average of 2.45 points. Great right? Not really. I suspect that the drop in % extended when looking at the large delta will be down to the fact that the higher the delta, the greater the price range will be already.

Looking at the average range for 3 and 5 bar periods with averages above and below the threshold large delta value: –

You can clearly see that the average range below the delta threshold is significantly lower than above it (over 8 ticks). Applying the same logic to the table above and you can see that the average extension for all delta values is going to have been pulled up by the results with higher delta.

What I believe this study demonstrates is that regardless of context, big delta does move the ES further in that direction. For 3 bars, the stats are pretty decent that you’ll get a good break within an hour, but this diminishes for the 5 bar data. This could be down to the fact that the 5 bar period has a greater average range still, it could be down to the observation that aggressive directional trading happens generally in a short space of time or it could be a combination of both. What is fairly obvious is that even if you don’t want to trade with big delta, you probably shouldn’t be trading against it unless you really know there’s an edge to do so in particular situations.

This study doesn’t take into account the chance of a pullback and further minimum push but with no break. Such a push is obviously going to be tradable and so the success rate of any strategy looking to take advantage of strong delta might be higher than the value indicated by the frequency of range extension. Another really important factor at least in my mind is that this study also does not address activity prior to the observed delta period. It doesn’t take into account acceleration – i.e. where the delta has been calm and suddenly moves strongly in one direction or where it has been marching in one direction and the increase might be seen as climatic.

Shares
Share This
We use cookies to ensure that we give you the best experience on our website. If you continue to use this site you must agree to our use of cookies.OkayRead more