Principles by Ray Dalio, “The Steve Jobs of Investing”

A couple of weeks ago, I was intrigued to see that Ray Dalio was on the Tim Ferriss Show, promoting his new book, Principles. Ray Dalio is as many will already be aware, the multi-billionaire founder of Bridgewater Associates, quite probably the most successful hedge fund in the world. Dubbed “the Steve Jobs of Investing”, he is well-known for his sound principles that underpin Bridgewater’s outstandingly effective culture and these principles are the basis of his new book.

How the Economic Machine Works

He also produced a fantastic video about “How the Economic Machine Works”, which really should be watched if you haven’t seen it already.

In this video, Ray Dalio shares a simple model of how economies work. This video is a MUST WATCH.

After listening to Tim Ferriss’ podcast episode, I remembered that Dalio had released a free pdf a good while ago by the same name of his new book. I was slightly disappointed to see that this free pdf appears to have been pulled down from Bridgewater’s website and the new Principles book is effectively an expanded version of it.

Then again, I did download the original a while ago now and honestly, I did not get to it.

Ray IS Human After All

The first part of Principles takes the reader through Dalio’s early years and paints a picture of a man who loves the markets. But this does not make him successful in itself. Sure, he has some early success. But things took a major turn for the worse, with Bridgewater coming close to going out of business.

Rather than thinking, ‘I’m right.’ I started to ask myself, ‘How do I know I’m right?’

This is before Dalio decides to reassess his business and the way he operates. There are major echoes here with how a trader’s journey unfolds – enthusiasm, some success, over confidence, failure, reassessment…. He also discusses the major struggles and journey with his son’s diagnoses of bipolar disorder – something which many would find too much of a distraction to continue to be successful in their careers AND tackle effectively at the same time.

Get the Principles audiobook for free with a 30-day FREE TRIAL of Audible or use one of your Audible credits.

Click on the image of the book cover to get started. 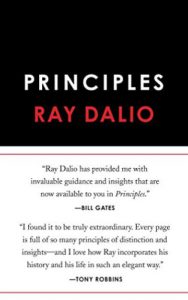 The rest of the book is dedicated to Dalio’s principles and could be viewed as a handbook for how to think and work. Clearly the book was never going to give us precise rules for every situation that could possibly come up, but what it does is present us with a framework of how to think in general.

Over the many years since Bridgewater was first formed out of his 2 bedroom New York apartment in 1975, Dalio has created and refined many strong mental models and principles to live and work by. Many of these are shared in these parts of the book. Some examples are:

After finally having got through Principles, I have gained a new respect for Ray Dalio as a determined and supremely principled individual. I have been inspired by the thought that the man has had to overcome his own weaknesses and faces many of the same types of battles that we all face from time to time. He has learned from his mistakes and he has evolved.